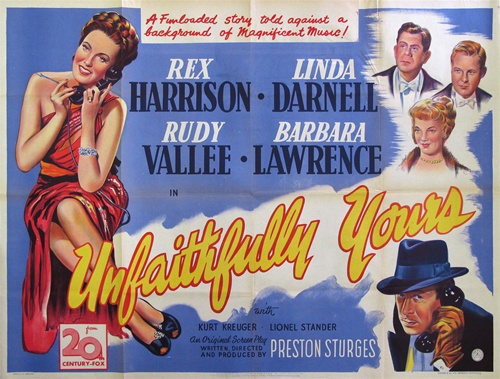 The 1948 film Unfaithfully Yours, written and directed by Preston Sturges, is a delightful slapstick comedy. Sturges' screenplay is ingenious. An egotistical, world-famous conductor (Rex Harrison) suspects that his beautiful young wife (Linda Darnell) is having an affair with his social secretary (Kurt Kreuger). He takes the stage to conduct selections from Rossini, Wagner, and Tchaikovsky, and imagines how he will handle the situation afterward. His fantasies are in tune with the music. The Rossini piece inspires a blackly farcical revenge plot in which he frames the secretary for his wife's murder. The melancholy passage by Wagner has him behaving with the utmost magnanimity. The Tchaikovsky music prompts a duel scenario in which he demonstrates his superiority to his wife and the secretary in both courage and honor. After the concert ends, he tries to act out his fantasies, and bungles his efforts at all three. Preston Sturges directs with timing so perfect it crackles, and Rex Harrison matches him every step of the way. The post-concert scene of the conductor haplessly wrecking his apartment is one of the great movie gag sequences. The comic high point is probably his bewilderment at trying to operate an allegedly easy-to-use home recording device. There are also some great incidental bits, such as a harpist doing her nails at rehearsal, and a percussionist going for broke with bigger and better cymbals. The good parts of the film are so strong that its flaws--the padded first act; the miscasting of the bland Kurt Kreuger as the secretary; Lionel Stander's annoying faux-Russian accent as the conductor's manager--are all but completely out of mind by the film's end. The cast also includes Rudy Vallee as the conductor's insufferable brother-in-law, Barbara Lawrence as the wife's sister, and Edgar Kennedy as a music-loving private detective.
Posted by R. S. Martin at 12:00:00 AM

Email ThisBlogThis!Share to TwitterShare to FacebookShare to Pinterest
Labels: 1948 Films