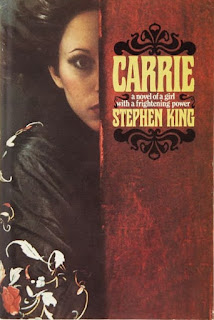 Carrie (1974), was Stephen King's first published novel, and while not his best (or even biggest-selling) effort, it's probably entered the cultural consciousness more than anything else he has written. It's a contemporary Gothic, set in a small New England town, and its title character is the high-school misfit. Carrie's home life is miserable; her father is dead, and her mother is an unstable, abusive religious fanatic. School, where she's a constant target for pranks and bullying, is no better. After a traumatic, humiliating incident in the girls' locker room, things change. A popular girl at school, ashamed at how Carrie's been treated, arranges for her boyfriend to take Carrie to the prom in her stead. But another classmate, furious at the disciplinary action that followed the locker-room episode, sees Carrie's presence at the dance as an opportunity for payback. The wild card is that Carrie has telekinetic powers, and the vicious prank at the dance has horrifying consequences for the entire town. The anti-bullying revenge melodrama--it's a Grand Guignol variation on Cinderella--is what gives the story its staying power. The hook, though, is King's exploitation of the taboos surrounding menstruation. The imagery of menstrual blood, feminine-hygiene products, and the embarrassment they inspire dominate an early scene, and it's shockingly indelible. King extends the dynamic of revulsion to a fascination with the teenage girls' bodies, and while he's hardly prurient, it gives the book an icky erotic edge. He was lucky to be tapped into such potent material, because in terms of craftsmanship, the book is a haphazardly constructed mess. The narrative technique is best described as modernist hodgepodge. Scenes written from the perspectives of the various characters, often in a stream-of-consciousness manner, are mixed up with journalistic accounts, memoir passages, and assorted government reports from after the story's events. The cross-temporal collage-style storytelling does nothing to enrich the material, and it's quite distracting. A less complicated approach would have definitely been more effective. But for all the criticisms one can make of the book, there's no denying how compelling it is.
Posted by R. S. Martin at 12:00:00 AM

Email ThisBlogThis!Share to TwitterShare to FacebookShare to Pinterest
Labels: 1974 Novels