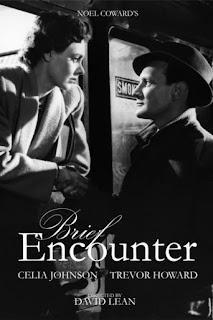 It is not enough to say the films of British director David Lean are well realized. They often feel more completely realized than seems possible. His extraordinary command of detail can be felt in every aspect of a production. Sets, locations, costuming, music, lighting, shot compositions, staging, editing, and, of course, dramatic effects--they are thought out and presented with the utmost care and meticulousness. His work sets the standard for storytelling craftsmanship. It's true of the spectacles for which he's most famous, and it's also true of small-scale efforts such as 1945's Brief Encounter. Adapted and expanded from the Noël Coward play Still Life, it tells the story of two married upper-middle-class train commuters (Celia Johnson and Trevor Howard) who meet and, in spite of themselves, fall in love. Lean builds the film around Johnson's extraordinary performance; she fully catches the viewer up in the agonizing conflict between her blossoming affection for the Howard character and her deep sense of commitment to her marriage and children. Every element of the picture, from the richly atmospheric depiction of the train station to the inspired use of Sergei Rachmaninoff's Piano Concerto No. 2, enhances the dramatization of the woman's dilemma. This is one of the most powerfully intimate love stories ever filmed. The performances by Howard and the supporting players are uniformly excellent. The screenplay is by Lean, Anthony Havelock-Allan, and Ronald Neame. Robert Krasker provided the beautifully moody cinematography.
Posted by R. S. Martin at 9:36:00 AM No comments: 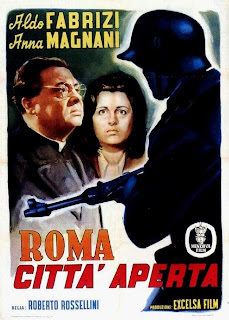 This 1945 Italian melodrama, about the World War II underground resistance in Rome, is as pulpy as the gaudiest Hollywood thriller. The director, Roberto Rossellini, shot it in strictly-from-hunger circumstances. The lighting is variable, several of the actors are non-professionals, and since there was no money for sets, the action had to be staged in actual streets, buildings, and apartments. The documentary-like atmosphere Rossellini captured--the style was dubbed Neo-Realism--became a hallmark of the existentialist aesthetic and revolutionized the art of film. Rome, Open City has a fair claim to being the single most influential movie made after World War II. It's such an important part of cinema history that one may feel reluctant to approach it as an entertainment. But the picture is entertaining. The gritty detail and sense of immediacy largely redeem the hackneyed contrivances of the plot, which includes resistance fighters on the run from the Nazis, a priest playing a central role in the intrigues, and a resistance hero being betrayed by his lover. If the film were more slickly made, it would seem laughably trashy. Some elements, such as the seductively chic lesbian Gestapo agent, may have one chuckling regardless. Others, like the scene in which a pregnant woman is shot to death in the street, prompt conflicting reactions. One may think this particular moment devastatingly powerful or offensively over the top, or perhaps both. Sergio Amidei is credited with the script. (Federico Fellini contributed some dialogue and other small bits.) The large cast includes Anna Magnani as the ill-fated expecting mother, Aldo Fabrizi as the stealthy priest, and Maria Michi as the treacherous paramour. Renzo Rossellini provided the cheesy thriller-style score.
Posted by R. S. Martin at 12:00:00 AM No comments:

Short Take: The Best Years of Our Lives

This review was originally published at Pol Culture. 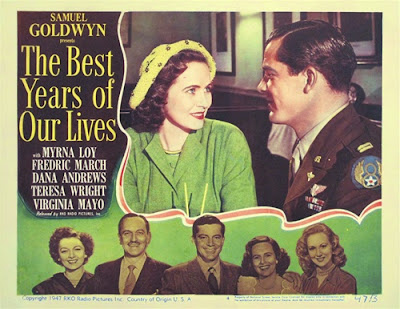 Director William Wyler’s 1946 film The Best Years of Our Lives has a promising subject: the experiences of three World War II servicemen while they readjust to civilian life. Dana Andrews plays a de-commissioned Air Force captain who was a bombardier during the war. Fredric March co-stars as a middle-aged banker who served as an Army infantry sergeant. The third protagonist is a young sailor (Harold Russell) whose hands were replaced with prosthetic hooks following a ship explosion. (Russell, a non-professional actor, was an actual double amputee.) The film eschews an upbeat treatment of the men's circumstances. The bombardier comes from a working-poor family and has no marketable skills; he can only find work as a drugstore floor associate and food-counter server. The banker struggles with alcohol abuse and doubts about his family and profession. The sailor feels shame over the challenges his disability creates for his loved ones. One wishes the film were better than it is. The dramatic situations, such as the banker’s conflicts with executives over veterans' loans, or the unhappily married bombardier’s growing involvement with another woman, are too simply conceived and too cleanly resolved. The negative aspects of alcohol abuse are downplayed; drunken behavior is tastelessly used for comic relief. The picture actively shies away from any moral ambivalence towards the characters. The attempts at allegory, such as the bombardier walking through an airfield filled with idled, stripped warplanes, are generally heavy-handed. But for all the film’s flaws, it’s an affecting piece of work. The men’s alienation is powerfully rendered at times, and this stays with one long after the picture is over. It was an enormous popular success and a multiple Academy Award winner, including Best Picture and Best Director. Fredric March and Harold Russell respectively won the Best Actor and Best Supporting Actor prizes. The cast’s standout, though, is Teresa Wright, who gives a strikingly expressive performance as the banker’s adult daughter. Robert E. Sherwood is credited with the screenplay, which was based on the novella Glory for Me, by MacKinlay Kantor. Gregg Toland was the cinematographer. Other cast members include Myrna Loy, Virginia Mayo, and Hoagy Carmichael.
Posted by R. S. Martin at 7:34:00 AM No comments:

Email ThisBlogThis!Share to TwitterShare to FacebookShare to Pinterest
Labels: 1946 Films 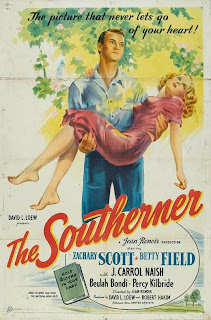 The Southerner, a 1945 Hollywood effort by the great French filmmaker Jean Renoir, has a gritty beauty. Its sympathetic though unsentimental portrayal of U. S. tenant farmers has much the same tone as Jean-François Millet's paintings of rustic life in France. Zachary Scott stars as a seasonal farm worker who decides to begin a new life as a sharecropper. The house on the plot he rents is a rundown hovel, and the ground is harsh and untilled. But he, his wife (Betty Field), his grandmother (Beulah Bondi), and his two young children make a dedicated go of it. Their travails are many--a hard winter, one child's illness, sabotage from a resentful neighbor (J. Carrol Naish)--but they maintain their resolve to see things through. There are also happy times, such as the beauty of the blossoming fields, the affectionate hijinks at a wedding reception, and the use of a giant catfish to settle a feud. Many filmmakers would treat this material with a patronizing eye, but not Renoir; his magnanimous sensibility suffuses it all. His cinematic mastery is also on full display. The action is staged to take maximum advantage of the deep-space compositions. The visuals always keep one aware of the farmers relative to their environment. They're sometimes the land's masters, and sometimes its fools. Zachary Scott, best known for playing cads and scoundrels, embodies the quiet nobility of the farmer as completely as can be. The screenplay, attributed to Renoir, is based on Hold Autumn in Your Hand, a 1941 novel by George Sessions Perry. Hugo Butler wrote the preliminary adaptation. William Faulkner and Nunnally Johnson made uncredited contributions. The fine cinematography is by Lucien Andriot.
Posted by R. S. Martin at 7:51:00 AM No comments: 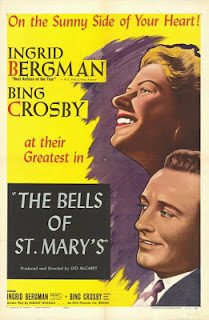 The year 1945 saw the release of The Bells of St. Mary's, director-producer Leo McCarey's sequel to his 1943 Oscar-winning hit Going My Way. To say The Bells of St. Mary's eclipsed its predecessor at the box office is an understatement. It was the most commercially successful live-action film of the 1940s. Its profile has faded, though, and it's not hard to see why. While amiable, it doesn't have the heft or sophistication of an enduring film. McCarey, screenwriter Dudley Nichols, and stars Bing Crosby and Ingrid Bergman were just looking to put together a breezy good time for audiences. Crosby reprises his Going My Way role as Roman Catholic priest Father O'Malley. The film begins as he undertakes his new assignment: he's to be the pastor at St. Mary's, a rundown inner-city parish school. The supervising nun is played by Ingrid Bergman, and the two quickly find themselves at friendly odds about how to run things. The story is mostly a series of vignettes that take place over the school year. The most amusing scenes are those involving the nun's efforts to teach a bullied boy how to box. The most charming is the nativity play put on by the school's first-graders. There are a few storylines that thread through the picture, such as the efforts to get a miserly local developer (Henry Travers) to donate his new building to the parish. Bing Crosby performs several songs, although the standout musical scene is probably Bergman's rendition of "Varvindar Friska (Spring Breezes)" in her native Swedish. It all goes down quite pleasantly. Ingrid Bergman's smile is especially memorable. 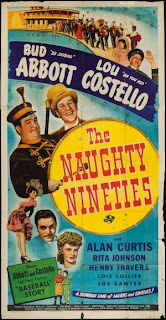 There aren't many films that deserve classic status for just a single scene. But The Naughty Nineties is one of them. This 1945 vehicle for the Bud Abbott and Lou Costello comedy duo features what is perhaps the finest recorded performance of their renowned "Who's on First?" skit. The sketch has the pair talking about baseball players, and the players have commonplace words and phrases for nicknames. (Who's on first base, What's on second, I Don't Know is on third, etc.) The joke is that the Costello character doesn't realize the words and phrases are the names, and he thinks the Abbott character is jerking him around. It's a witty, masterfully sustained piece of extended wordplay, and Costello's handling of his character's mounting exasperation is hilarious. The rest of the film is a better than average Abbott and Costello comedy. The setting is a showboat on the Mississippi River in the 1890s. Abbott plays an actor who oversees the boat's stage shows, and Costello is his sidekick and gofer. In the first act, the captain (Henry Travers) loses most of his equity in the ship in a crooked card game. The gamblers who now have controlling interest turn the boat into a floating casino. The actor, the sidekick, and other ship personnel connive to restore ownership to the captain. The plot is slight, and it has a quick, easy resolution. It doesn't strive to be anything more than a scaffolding for Abbott and Costello's comedy routines. The standout after "Who's on First?" is probably "Eating Catfish," in which the Costello character believes his catfish dinner has been prepared from a (still meowing) housecat. The "Lower/Higher" sketch, which has Costello's character mistaking orders to the stage crew as singing directions, is pretty funny as well. The director, Jean Yarbrough, keeps the pacing brisk.