Short Take: Into the Night 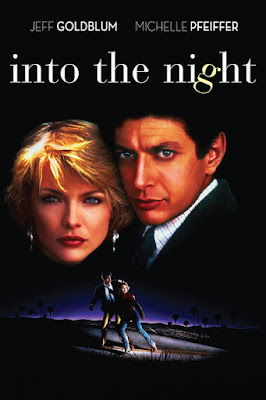 The 1985 film Into the Night, directed by John Landis from a script credited to Ron Koslow, is ostensibly a romantic comic thriller. But in its odd, rather bumbling way, it’s about as close as Hollywood filmmaking has ever gotten to the poetic, ennui-minded dramas of the great Italian filmmaker Michelangelo Antonioni. Jeff Goldblum stars as Ed Okin, a thirtysomething Los Angeles aerospace engineer. He’s at a professional dead end, his wife is cheating on him, and he can’t sleep. The night after discovering his wife’s infidelity, he drives to the airport. Just as he changes his mind about whatever he was planning, Diana (Michelle Pfeiffer) jumps onto the hood of his car, with a quartet of Iranian mercenaries hot on her trail. The two escape the mercenaries, and Ed spends the next 24 hours helping Diana in her efforts to dig herself out of the hole of gem-smuggling intrigues she’s found herself in. Among other things, the picture is a trip through the Hollywood demimonde. It is not much of a thriller, though. Koslow’s plotting isn’t clever or tense, and Landis seems determined, despite the occasional grisliness, to keep the action scenes as mundane as possible. The picture is not especially funny, either; the humor is droll and rarely laugh-out-loud. There’s also not much of a love story. While Ed and Diana find a rapport, their one kiss is platonic, and if the two ever have a romance, it’s only after the end credits roll. The Antonioni comparison may seem a reach, but while Landis is nowhere Antonioni’s equal as a filmmaking stylist, and he’s certainly no poet, the dramatization of Ed’s anomie and the swank L. A.-after-dark settings do capture a good deal of the atmosphere that defines the Italian director’s films. The feel of Edward Hopper paintings such as "Nighthawks" also comes to mind. Overall, the unusual tone and off-kilter rhythms are compelling even when the story isn’t. Landis also has the showman’s instincts to keep the picture hopping. He populates the goings-on with a bevy of Hollywood eccentrics, many of whom are played by famous directors and other show-business notables. The most entertaining: David Bowie as a gangster’s henchman, Paul Mazursky as a sleazeball TV producer, and Bruce McGill, who’s hilarious as a short-tempered Elvis impersonator. Also deserving of mention: Richard Farnsworth, who delivers a lovely sentimental turn as Diana’s one-time sugar daddy, and Irene Papas, as the imperious Iranian exile behind Diana’s predicament. Probably most importantly, Landis has the considerable appeal of his two stars. Jeff Goldblum has a dry comic pathos as Ed, and he makes the character’s befuddlement at the various goings-on quite amusing. Michelle Pfeiffer is charming as Diana, and she plays every scene with a striking degree of nuance. Her talent outsizes the role. One may feel she makes Diana seem too intelligent and level-headed to get into the mess in which the character finds herself, but the fault is more with the script than the performance. There are no scenes that demonstrate Diana’s purported flightiness. Characters may talk about it, but it’s never shown. Robert Paynter provided the film’s cinematography. Ira Newborn is credited with the film’s bluesy score, which he built around guitar improvisations by B. B. King--all recorded while King watched a rough cut of the picture. King also contributed performances of three songs to the soundtrack: “Into the Night” and “My Lucille”--both original to the film--and Wilson Pickett's “In the Midnight Hour.”
Posted by R. S. Martin at 2:50:00 PM